SHORT STORY
THE ADVENTURES OF BLOG 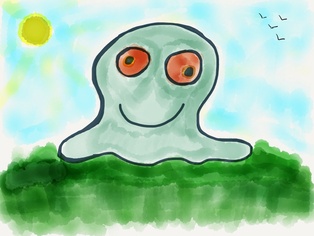 Fifty years ago a Russian scientist was working on Sputnik, the world's first man-made satellite.
The scientist was responsible for attaching the simple sphere to the rocket that would place it in orbit.
He fixed it in place and  prepared to shut the hatch that would seal it inside the rocket.
At the last moment the man sneezed.
A glob of mucus landed on Sputnik's casing.
The scientist was going to clean it off, but then thought, why bother? no one is going to see it.
And so Sputnik went into space with a little traveller attached to its surface.
The rocket soared into the atmospere of planet Earth and released its saterlite, the first of thousands to eventually orbit the Earth.
But something happened that no one expected or even knew could happen.
The tiny bit of mucus on Sputnick was exposed to a dose of radiation from the sun.
It was then that the mucus changed, it grew and grew, feeding on the radiation that turned it into a brand new form of life, a blob of goo with mad eyes and the widest smile. 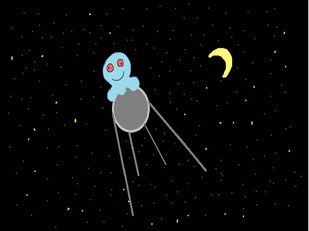 It had no name and it wouldn't get one for sixty years.
The creature spent the next six decades drifting from saterlite to saterlite inspecting every new one that mankind sent into space.
Its favourite was the Hubble Telescope, which explains why NASA have to clean it so often, because it was always covered in goo.
Then one day in 2013 the mass of mucus spyed a brand new saterlite, at least it assumed it was a saterlite. The biggest difference between it and any other was that this one was coming towards the Earth from space, rather than from the Earth into space.
The creature watched it speed towards the planet facinated by its shape and size and flaming tail.
Then the lifeform realised that the saterlite was a space ship and it was heading straight for him.
The vessel's nose hit the blob in the face and for the first time in its life it was pushed into the Earth's atmosphere and down onto the planet. 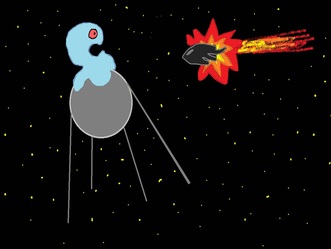 The blob tried to get off the nose of the spaceship but it couldn't, the ship was going too fast and was pushing him too hard.
The next thing he knew there was a crash and a boom and he found himself buried in the
earth. The creature did not like being buried in dirt, he liked space and saterlites. He stayed buried for a few days until a rabbit dug its tunnel right up to where he was. The rabbit was shocked as this gooey creature wormed its way down the tunnels of the rabbit's home until finally he saw the sun once more. 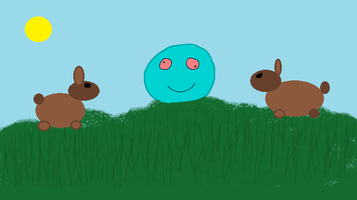 It also saw three humans, which it had only ever seen in space suits before.
The three humans were delighted to see him, they thought he was cute and funny.
He also met a man made from machinery who gave him a place to stay in his space ship, the  same space ship that had brought him to Earth.
The blob forgot all about space after meeting these humans, he had found a new home now and for the first time in his life, friends.
"What do we call him?" one of the humans asked.
"He looks like a blob," another said.
"He acts like a dog," said the third human.
The three humans looked at each other with wide eyes.
"BLOG!" the said together.
And that was how he got his name.